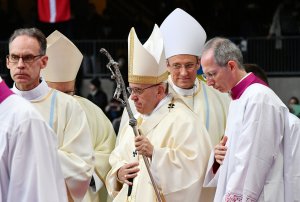 VATICAN CITY — A Vatican diplomat working in Washington has been recalled to the Holy See after the U.S. State Department said the priest may have violated child pornography laws, the Vatican said on Friday.

Prosecutors in the Vatican have opened an investigation into the case, which represents a fresh blow to the Roman Catholic Church as it struggles to overcome repeated sex abuse scandals among its clergy.

The State Department notified the Holy See in August “of a possible violation of laws relating to child pornography images by a member of the diplomatic corps of the Holy See to ensure full implementation of its reforms and policies designed to protect minors and provide justice regarding allegations” the spokesman said.

A State Department spokesman said the United States had requested that the man’s diplomatic immunity be waived to open the way for possible prosecution, but the Vatican refused.

The priest, who was not named, has returned to Vatican City and is awaiting the outcome of the Holy See investigation, which could lead to a trial in the tiny city state.

The U.S.-based Survivors Network of Those Abused by Priests said possession of child pornography was not a victimless crime because the children involved were being abused.

“(Pope Francis) must bring the diplomat back to the United States in order to adhere to his promises of complying with investigations by civil authorities in cases of child sexual abuse,” SNAP managing director Barbara Dorris said.

Pope Francis has declared zero tolerance over abuse scandals that have beset the Church for decades, but has appeared to struggle to overcome resistance within the Vatican hierarchy.

The State Department spokesman said the pope had promised to “act decisively with regard to cases of sexual abuse” and punish those found guilty of wrongdoing.

“The United States encourages the Holy See to ensure full implementation of its reforms and policies designed to protect minors and provide justice regarding allegations,” the spokesman said.

Two years ago the Vatican put the former papal ambassador to the Dominican Republic on trial for child sex offences, a case that was seen as showing the pope’s determination to clean up the Church.

The priest, Jozef Wesolowski, was charged with paying boys to perform sexual acts, of downloading and buying pedophile material. He died before a verdict was reached.

He was the first high-ranking Catholic official to stand trial in the Vatican on such sex charges and the case was closely watched by victims of priestly abuse, who have accused the Vatican of repeatedly hushing up previous scandals.

Just last month, in the foreword to a new book written by a Swiss man who was raped by a priest when he was 8 years old, Pope Francis said sexual abuse of children by priests was a “monstrosity” and pledged to take action against perpetrators.