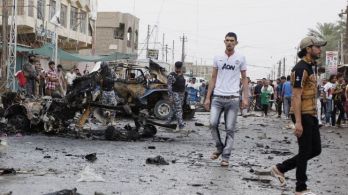 A militant attack at a checkpoint and nearby restaurant in southern Iraq on Thursday killed at least 45 people, officials said. Yahya al-Nassiri, the governor of Iraq’s southern Thi Qar province, said the attack also left 83 people wounded. The militants opened fire at the checkpoint along the highway linking Baghdad to the country’s southern provinces, and two suicide bombers then set off their explosives, including one car bomb, al-Nassiri said. He said some of the dead likely included Iranian pilgrims who were at the restaurant. No group has claimed responsibility for the attack.