Another Chick-fil-A restaurant has been discriminated against and barred from doing business because of their non-compliance/agreement to the ways of Sodom and Gomorrah! The food chain is allegedly anti LGBT, however; the food chain has never discriminated against a LGBT person, or entity but some company’s still seem to have a problem with the CEO voicing his beliefs regarding marriage, therefore they are basically bullying the Chick-fil-A CEO by banning the food chain from certain locations, in this instance- the Buffalo Niagara International Airport cut all ties with the fast-food chain, despite that it was factored into the original plans for a full renovation of the airport facility.

Revelations 13:17-  And that no man might buy or sell, save he that had the mark, or the name of the beast, or the number of his name.

The “mark of the beast in this instance is “LGBT”

“I strongly urge the NFTA to reverse this decision,” the Democrat wrote. “I don’t believe the leadership of the NFTA intends to help spread hate and discrimination, but allowing a corporation like Chick-fil-A to do business at the Buffalo Niagara International Airport will help to fund continued divisive anti-LGBTQ rhetoric. New York is a welcoming state that celebrates diversity.” 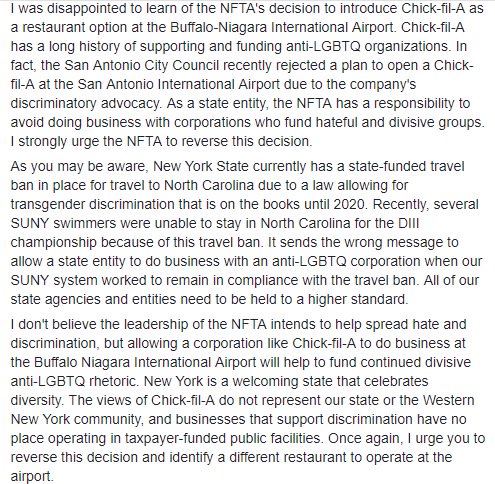 I’m disappointed in the @NFTA decision to bring a Chick-fil-A to the @BUFAirport.

I guess the anti-Christ companies are trying to bully the Chick -fil-A  CEO into submission OR punish him because of his beliefs.

When the decision was reversed, Ryan tweeted an update, writing, “I applaud the decision that has been made to remove Chick-fil-A from plans for the Buffalo Niagara International Airport. Thank you to everyone who reached out to share their opinion.”

“We hope in the future the NFTA will make every effort to contract with businesses that adhere to anti-discrimination policies, and we’re confident another vendor who better represents the values of the Western New York community will replace Chick-fil-A as a part of this project in the very near future,” he added.

It is unclear what company will take Chick-fil-A’s place inside the airport but it doesn’t really matter because Chick-fil-A is an American icon who serves delicious food, that’s what people want- GOOD FOOD and not every American is on-board with the LGBTQ lifestyle so don’t expect Chick-fil-A to go out of business  because of the beliefs of the CEO (which should be respected), it just aint gonna happen!

The controversy has become so prominent that even a presidential candidate has now weighed in. Pete Buttigieg, who is running for the 2020 Democratic nomination, has said he’d be open to brokering a “peace deal” between Chick-fil-A and those who disagree with the restaurant CEO’s views on marriage.

Following the decision to pull Chick-fil-A from Buffalo, a spokesperson for the chain said that recent reports “continue to drive an inaccurate narrative about our brand.”

“We do not have a political or social agenda or discriminate against any group. More than 145,000 people from different backgrounds and beliefs represent the Chick-fil-A brand,” they told WKBW-TV. “We embrace all people, regardless of religion, race, gender, ethnicity, sexual orientation or gender identity.”

Tagged as: Bullying others for non compliance to LGBT beliefs, Chick-fil-A being punished for standing for holiness, Dont be bullied into complying with non holy beliefs, holiness or nothing, holiness will win in the end, Just as it was during the time of Sodom and Gomorrah, New York airport, Niagara Frontier Transportation Authority, Sean Ryan/Sodom and Gomorrah